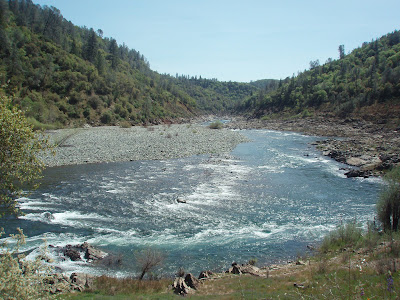 After dinner at the Klein's house, Raj and I took a quick ride out to look at the finish line area and then checked into the motel. We set up our drop bags and turned in for an early morning wake-up.

The next morning we got our gear together. 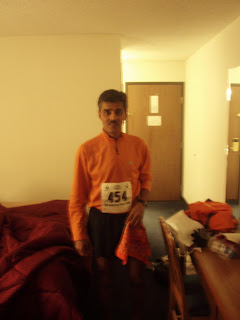 I taped the bottom of my feet as I was wearing relatively new shoes and I had felt some hot spots earlier in some training runs. Soon we headed to the finish line. We parked the car there and caught a shuttle to the start. 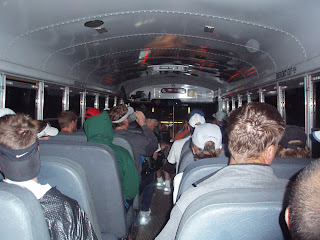 We met fellow Ultraholic Mark Nassi and rode to the start. 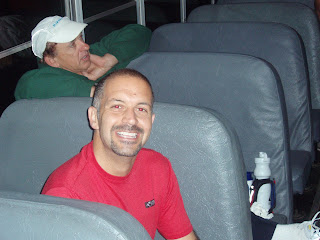 On the shuttle I was chatting with a guy next to me named Martin. He was from Marin and it turns out he crewed Gillian (from Zombie Runner) at her Badwater 135 event. Really nice guy.

We arrived at the start and stayed in the bus to keep warm until the last possible moment. 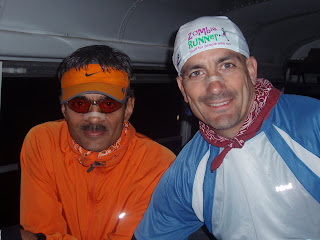 Then we dropped off our drop-bags. At the start we saw familiar faces and met up with fellow Ultraholic Mark Tanaka. 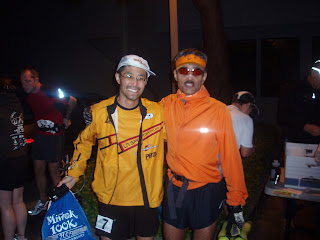 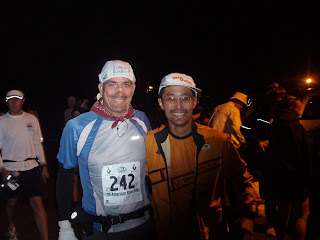 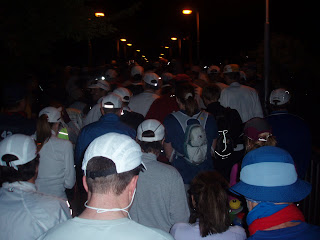 I started mid-pack and began slowly mindful of my piriformis. This had caused my first ever DNF at Rocky Raccoon and limited my training since then. The race started on a footbridge and turned onto a bike path. 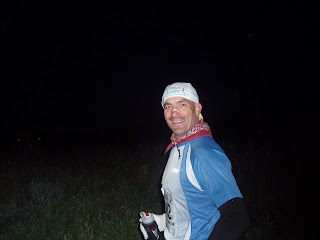 I was slowly passing people and around the 1 mile point saw Chihping. Chihping is training for the Grand Slam this year. We chatted for a bit and I headed off. I soon saw the back of the Western States legend Tim Twietmeyer in front of me. 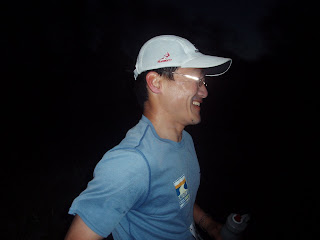 I kept the same pace as Tim for the longest time - we were running between 7 and 7 1/2 minute miles. The bike path was flat with ups and downs here and there. 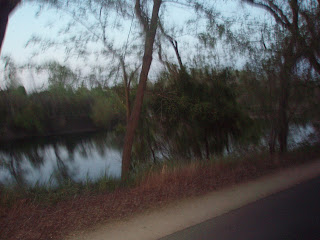 I was surprised to see a lot of wild/feral turkeys on the route. 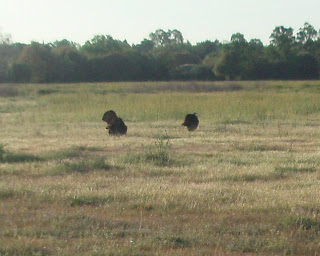 I was right next to Tim Tweitmeyer when I heard a voice in front say "that is the marathon" - he had some GPS device on. I looked at my watch and it was a 3:16:13. Not bad I thought. But my legs were really starting to feel sore from my new running shoes. I began to wish that I didn't change shoes that close to a race. 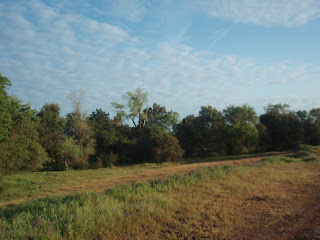 Soon, Tim began to pull away from me. 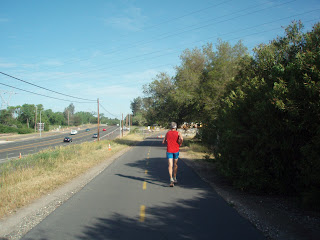 A few minutes later I came across Ray Sanchez. Ray, like me, will be running Badwater 135 this year. We chatted for quite a bit and came into the first drop bag zone together. This was at the 28 mile mark and our time was exactly 3 hours, 30 minutes.

I decided to change shoes and down an Ensure for energy. Ray however took off. He said he had a plane to catch for a southern California race (yeah..like I am the crazy one).

Soon I got up and started running. The first mile was tough, but I got a second wind and took off. The trail now was basically the morning part of the Rio Del Lago 100 mile run, so I knew it pretty well. 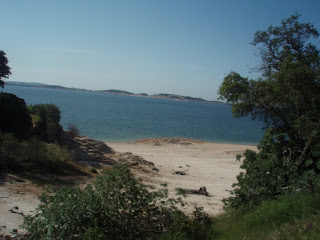 I ran/walked up the trails and after awhile I began to realize that the weather.com forecast of a 65 F degree high was WAY off. I was pouring water over my head. It wasn't like it was 100 degrees, but there was little shade, canyon walls and a bald head to deal with. 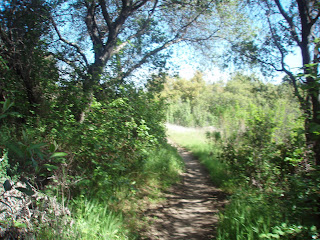 Soon I went into a shadey trail section and started running faster. Cruised past a carcass that I later found out was a deer that was killed by a mountain lion right along the route. The wildflowers were in full bloom and the course was beautiful. 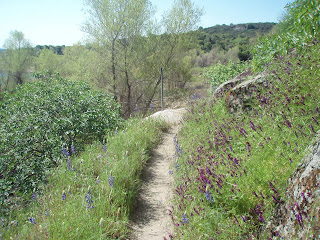 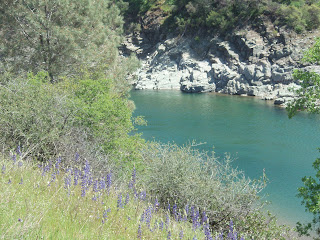 Then it became a downhill towards Rattlesenake Bar - the 40 mile drop bag station. My legs were pretty thrashed by this point. I realized that I am no Dr. Tanaka or Michael Kanning - I can't run my 50km pace for a 50 mile race. So I lotioned my feet with some Swiss sports balm that I swear by, slapped my shoes back on and took off. 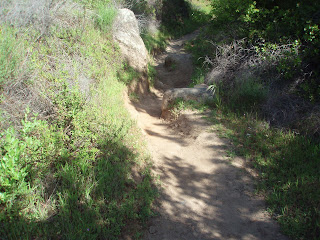 I started the trail tired, but within 2 minutes realized that my feet/legs felt better. So I took off. Within the next 3 miles, I passed a half dozen people and felt great. I was having so much fun and feeling good, I forgot to make myself drink or take electrolytes. 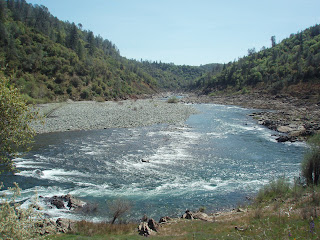 Then around mile 42 I started feeling not so hot. Next thing I knew, I was bent over throwing up. A runner whom I passed 10 minutes earlier came pass and slapped me on the back and said "This is a great place - I threw up here a year ago." Despite being the funniest words I heard in awhile, I couldn't run that fast. Still, I went off. I looked at my watch and thought that if I really tried, I might go sub 8:30 and get a new P.R. 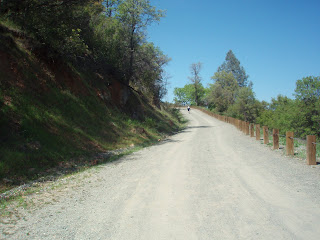 Once I hit the final climb however, I knew my p.r. hunt was over. I was throwing-up/dry heaving about once every 800 to 1000 meters. By the time I hit the last aid station with just over 2 miles to go, I couldn't keep anything down. I couldn't run and even walking I had the dry heaves every 400 meters. God I love this sport! 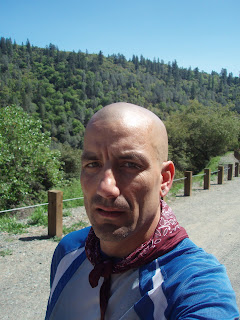 Nevertheless, with a lot of runners giving me words of encouragement as the passed by, I finally made the final turn onto the road. I saw the Dam Overlook parking lot and walked toward the finishers line. I tried jogging across, but it was just a shuffle. My name was called out, but not by Norm Klein as I was expecting. I found out later Norm came down with laryngitis the morning of the race. Helen was probably very appreciative :) I crossed the line at 8 hours 52 minute (my second fastest 50 miler).

At the finish line I sat on a chair and had my timing chip removed. When I went to stand up, I couldn't. A volunteer finally helped me up and I barely remember being lead over to the medical area. The two people there were awesome. One was the lead medical coordinator at Western States. They took my vital signs and the next thing I knew, I had my first ever ultrarunning-induced I.V. My body sucked through it so fast - I was given a second one (you can see my IV hanging from the tree). 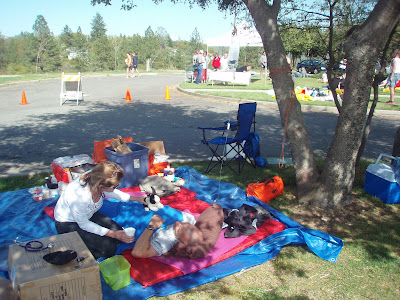 God I love this sport!

Chihping finished, going under 10 hours, and came to sit next to me. We chatted a bit. Anyway, about an hour later I was feeling much better. But, after two IV's, water and 4 helpings of vegetable soup, I was still not peeing. In fact, it wasn't until after driving all the way back to the bay area and being home for about 30 minutes did I finally need to go. This was actually a valuable lesson for me. With some hot races coming up such as Keys Ultra and Badwater, it reinforces in me the need to really monitor my electrolyte intake. I had some electrolyte pills on me, but I was concentrating so much on running, I only took one pill and that was in the first 10 miles.

After leaving medical, I strolled around and Chihping and I watched Yuki finish the race. 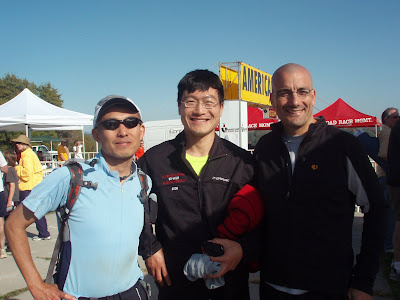 I then saw the ever colorful and fun Dirt Diva Catra Corbett come across the line. I congratulated her and Norm came over to congratulate her and snap some fun photos. 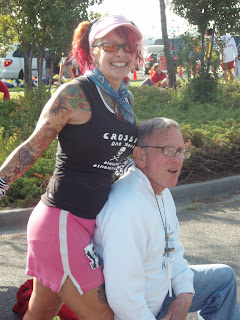 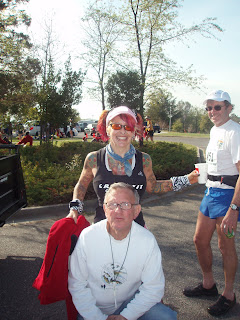 Then it was Raj's turn. He approached the finish line but the announcers were talking about something else, so he just stopped and did a silly hula-like dance until the announcers saw him and called his name. Norm tried to state over the loudspeaker in his barely-audible voice, "Raj is the ugliest runner in the race today". LOL 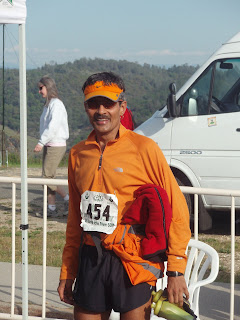 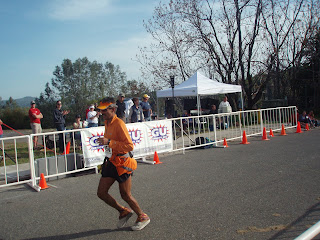 I looked at the results and saw that Mark Nassi did a great finish of around 9 1/2 hours. Michael Kanning, the Ultra wunderkid, did a low 7 hour finish and Mark Tanaka took 16th overall.

Congratulations on your second best 50M time in spite of the stomach issues. You are a stud!!

Thank you also for all the wonderful photos in your report. Be assured that I aim to steal and use some for my own report!

Great seeing you and Rajeev at the start (and picture you both at the end). Awesome report and way to finish dramatically. It's great that you love y/our sport, but is dry heaving REALLY that fun? (Okay, just kidding about sounding incredulous-- I LOVE feeling sick and getting beaten up during these things too.... ) Congrats on your (1st?) post-race IV! Definitely you need to pee more, so hopefully this will be valuable learning for Badwater.

I'm always glad to take advantage of the photo subsidy that bloggers like you and Scott Dunlap who carry their cameras offer, so I'll specifically refer to your posting in my own blog report, devoid of any photos on the course. Thanks.

See you at Ruth (and not just at the beginning I hope...)

I like how you are so proud of your "first ultrarunning induced IV"-such hopeless masochism! But seriously, way to stick it out and finish the race.

Too bad I didn't see you Saturday, but as RA is much smaller I look forward to seeing you there. And, I hope you do the 100K. You'll nab a PR in whichever distance you choose, so why not just select the farthest on the menu?

Feel free to take any photos you want from the report (I have a few otehrs too I can e-mail you).

Mark - yup, it is a good lesson for Badwater. I'm glad I got it out of my system (no pun intended) at AR50, not during Badwater.

See you both at Ruth Anderson!

I'll look for you at Ruth Anderson. I guess I'll just see what races you and Mark are running and then select the remaining one so I still have a chance for a win :)

Congrats Alan, thats a v fast time inspite of stomach issues. too bad you encountered them, but as you said its a lesson.

v nice pictures of the course, its so much fun to run the latter half.

Did your piriformis hurt at all? I had a similar issue coming into this with piriformis pain hitting me 3 weeks prior to this run. I was worried it would whack me, but it never was a problem for me.

Since you never mention it after your first paragraph, am guessing you were fine in that area.

Thank you. If I had run smarter, I know I had sub-8, but better I was stupid then instead of at something like Leadville, Badwater or Mont Blanc.

I felt some dull pain deep in the piriformis muscle, but it never radiated down to the knee or foot. This was a HUGE relief, especially with the Keys 100 coming up. I'm glad you also were not impacted by any piriformis issues.

I am impressed that you have gone through the ultra through hard lessons, but still keep high faith. I believe your day is not soon.

Stay strong and healthy for Key100!

Yes, I certainly find the "challenge" in ultras :) This was the second time I encountered nausea on that trail (my Rio Del Lago report talks about the other time), coupled with piriformis, Texas humidity, and the DNF, the fun continues :)

Hey, if it was easy - why do it, huh? Like someone once said, “Life should NOT be a journey to the grave with the intention of arriving safely in an attractive and well preserved body, but rather to skid in sideways, beer in one hand, martini in the other, body thoroughly used up, totally worn out and screaming “WOO HOO what a ride!”

Goos stuff, Alan. Way to gut out another tough run. See you at RA.

Thanks Peter - see you at the races. 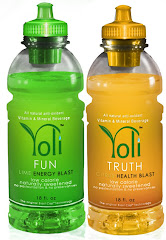